3 Top Pickup Trucks of 2014, According to Consumer Reports

5 These Are the Worst Cars of 2014, According to Consumer Reports
Coverstory

Home > News > Car Profile
Ciprian Florea
Introduced in 2007, the Buick Enclave received a facelift for the 2013 model year, when a new chrome waterfall grille, LED running lights and taillights and a redesigned dashboard were added, among other features.
1 photo
The three-row SUV, which is Buick’s best-selling vehicle with more than 60,000 units delivered in the US only, was recently reviewed by Consumer Reports.

The renowned magazine praised the vehicle for its minivan-like, family friendly and quiet interior, adding that the Enclave is a great “highway cruiser” that also handles well on inner city tight roads.

On the other hand, CR says that some of the SUV’s interior details feel dated, including the Intellilink infotainment system’s small screen. Additionally, the reviewer notes that Buick should have offered a push button on the 2014 Enclave.

But the slightly dated interior is not CR’s biggest concern. Toward the end of the video, they reveal that the 3.6-liter V6 engine, which generates 288 hp and comes with a six-speed automatic, returned only 15 miles per gallon combined, falling 2-3 mpg behind other three-row SUVs.

In fact, it appears that the 2014 Buick Enclave gulps as much gasoline as the 2015 Chevrolet Tahoe, which ain’t something a car-based SUV should be proud of. Click past the jump to watch the short review. 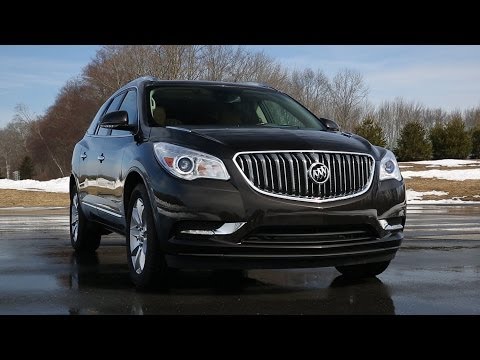