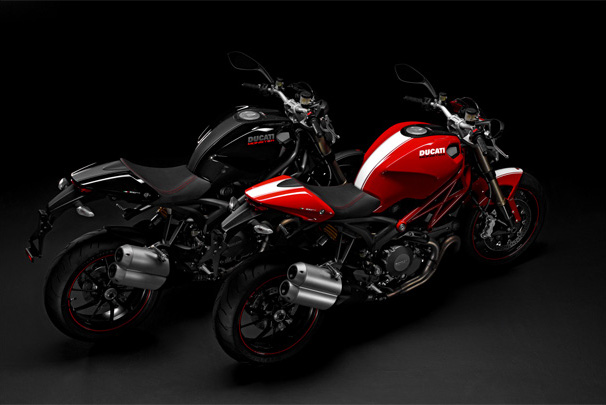 Ducati have recently revealed they will unveil the new Monster 1100 EVO, as an early debut 2012 model, at the New York International Motorcycle Show, January 21-23, 2011. The new bike is the flagship of Ducati’s Monster line-up - its best selling model family ever.

The machine is equipped with the new 100 horsepower Desmodue Evoluzione engine - making it the most powerful air cooled Ducati ever. Compared to the previous 1100 cc twin-cylinder air-cooled L-Desmodromic, this unit has high revs and a more linear torque curve.

The Monster 1100 EVO also marks the arrival of the new “Ducati Safety Pack”, a simple and effective combination of adjustable traction control and ABS brakes designed to aid rider safety. The innovative new package is the first of its kind to be offered in the interest of rider safety as opposed to outright performance figures.

The Monster 1100 EVO features a new APTC wet clutch which ensures quiet operation and long life. In addition, the progressive self-servo mechanism reduces the lever effort at the handlebar and makes the Monster even more practical in traffic.

The APTC wet clutch works with a race-like ‘slipper’ system which reduces the destabilizing effect of the rear-end under aggressive down-shifting, and compared with other wet clutch used so far by Ducati, features an additional cush-drive damper mechanism which smooths the repeated transition from drive to over-run during stop-start traffic.