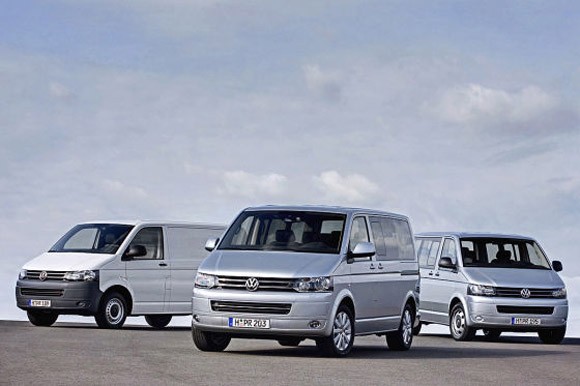 Even if the parent company Volkswagen is getting ready for the official debut of the Transporter, the car is again making the headlines, this time thanks to a couple of leaked photos that reached the web a few days ago. The facelifted 2010 Transporter will be on display at the Frankfurt Auto Show next month, along with various other goodies prepared by Volkswagen.

As you can see in the leaked images, as well as in the spyshots we brought to you some time ago, the 2010 model comes with several enhancements concerning the front fascia which now reminds us of other Volkswagen models. A restyled front bumper plus new side mirrors are also included in the package.

Inside, the new Transporter boasts a wide array of changes when compared to the current model. The best example is given by the upgraded instrument panel and the steering wheel which are more or less different than the ones seen on the current Transporter.

Still in the rumor stage, but it appears the 2010 facelift will rely on engines ranging between 1.9-liter TDI 84 horsepower and 200 Nm of torque and 3.2-liter petrol with 235 horsepower. The car will be sold in two configurations, passenger or commercial vehicle.

Volkswagen Transporter is currently sold in various regions of the world using different names, including Eurovan in Mexico. Nevertheless, the German brand still doesn't plan to launch the Transporter in the United States and prefers to offer Americans the Routan, a 7-seater model based on Dodge Caravan.

More information are expected in the upcoming days as we get closer to the official debut of the car.