1 All New Ducati Models to Have Pirelli Tires 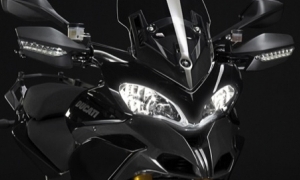 The recently revealed 2010 Ducati Multistrada 1200 four-bikes-in-one model, which will arrive to the US next spring, now has a price tag. So, for the North American continent, the bike will be available in four different variations, ranging between $14,995 - $19,995.

Therefore, the Ducati Multistrada 1200 base model is priced at $14,995, and features the upgraded L-Twin motor producing a claimed 150 hp and 87.5 lb-ft torque. It has a dry weight of just 189 kg (417lb), while the bike’s front fork is an inverted 50mm Marzocchi unit. It also features Sachs rear shock, with both units fully adjustable, while braking is helped by radial-mount Brembo calipers.

The next in line is the Ducati Multistrada 1200 ABS version, priced at $16,495, which means the ABS system will cost you some extra $1,500. It is a Bosch-Brembo system and Ducati promises it “will reinforce the brand’s reputation for world-class stopping power.”

Next, we have the Ducati Multistrada 1200 Sport that will only take $19,995 out of your pocket. Apparently, this up-spec “S” model features higher performance suspension, thanks to the fully-adjustable Ohlins fork and the shock replacing the stock units. The extra $5,000 go for the carbon fiber air intakes and other parts, as well as the Bosch-Brembo ABS system.

And last, but not the least, also priced at $19,995, is the Ducati Multistrada 1200 Touring that includes the Ohlins suspenders and ABS standard. However, unlike the Sport version, the Touring comes with integrated luggage, heated grips and a centerstand.