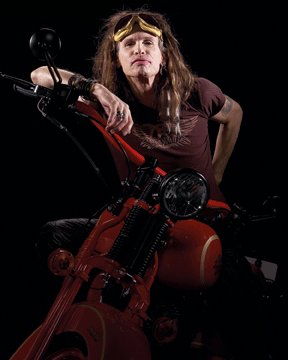 How could the second annual Legends Ride be missed by Aerosmith’s lead singer, well-known for his love for the two-wheeled vehicles? Steve Tyler, along with Roger Bourget, Christian Clayton, Brain Klock, Michael Prugh and Paul Yaffe will be special guests of the 2009 Legends Ride, a kick start of the Sturgis Motorcycle Rally.

Tyler will take part in the 50-mile escorted Legends Ride on August 3, together Dirico Motorcycles USA with which he launched Red Wing Motorcycles. The participants will go from historic Deadwood, S.D., through the Black Hills, and will end at the Legendary Buffalo Chip in Sturgis, where Aerosmith is due to give a live performance on August 5.

"The Black Hills have long been known as rider's paradise, and the Legends Ride takes it one step further. You start in a town that's infamous - Deadwood - ride through some of the nat200ion's best territory, and finish in the granddaddy of all motorcycle dreams - Sturgis and the Legendary Buffalo Chip; and you benefit charities," said Rod Woodruff of the Legendary Buffalo Chip. "Every participant in this year's Legends Ride is going to be talking about this very special event for the rest of their lives."

Besides Aerosmith, concert performances will also feature rocker Lita Ford and country music superstar Toby Keith. The Legends Ride reception will be highlighted by a live auction featuring "The Deadwood Special," a one of a kind custom motorcycle built by Kyle Shorey of Shadetree Fabrications and a pinstriping demonstration by Buck Wild.

The 2009 Legends Ride is a $150 contribution, all of which goes to the two charities, chosen by the Kids & Chrome Foundation, namely the Black Hills Children’s Home Society and the Sturgis Motorcycle Museum & Hall of Fame. Tickets can be purchased online at www.legendsride.com.