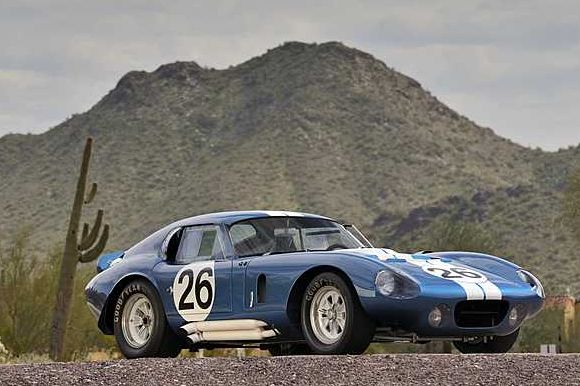 Mecum High Performance Auctions expect to set a new world record with a rare 1965 Shelby Daytona Cobra Coupe CSX2601 to be auctioned at the 22nd Dana Mecum Original Spring Classic Auction, on May 13-17, 2009, in Indianapolis, Indiana.

The organizers are extremely positive the car will surpass the $11 million paid for a 1961 Ferrari California Spyder and that it will fetch between $12 and $15 million.

The 1965 Shelby Daytona Cobra Coupe is now fully restored and wearing the Reims livery, but driver Bob Bondurant, the one who drove the Shelby and won the 1965 World Championship for the United States, still remembers how they beat Ferraris together.

“I won a lot of races with this Daytona Cobra Coupe, but when I crossed the finish line at the Reims race track I yelled ‘Yes!’ It was a fantastic feeling,” said Bondurant.

“I always wanted to race in Europe against the world’s best drivers. Winning that World Championship was the crowning achievement of my career. I think it’s wonderful that the car is being showcased 40 years later.”

“This car is a true slice of Americana, representing a different time in America’s past when driving a full-blown race car on the roads didn’t turn heads,” added Dana Mecum, president of Mecum Auction.

“The Daytona was also leased to Paramount Pictures for use in the Howard Hawks cult classic ‘Redline 7000.”

The auction will be broadcasted live on National TV on Friday, May 15, 2009, at 8:00 PM, during the “Mecum Auto Auction: Muscle Cars & More” on HD Theater - Discovery Communications’.