The first bikes with a Condor signature on it were the A580 and the A750, designed for the army. 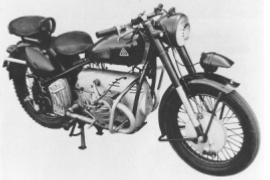