Hans Albert Zender had a vision that became a reality and evolved from a small tuning company into a car manufacturer.

When the company's founder was just 23-year-old, he started to make custom bucket seats for race cars. Later on, he began working for flared wheel fenders for NSU RO80. The evolution followed, and the company expanded from a small shop in a garage to a factory that produced vehicles and body panels for big names in the motoring industry. In 1999, Zender showed the Thirty 7 (30 – 7) concept, which celebrated the thirty years since the company was founded.

Zender started from the bare chassis of a Lotus Elise, which was suitable for what the German car manufacturer tried to show to the public. The design was unique, with two round headlights placed on the sides of the front fascia, with two headlamps, one on top of each other. For turn signals, the design team arranged slim longitudinal bars on the outer sides of the headlights. The car sported two cuts on the door panels that hid the handles and the air intake for the mid-mounted engine.

Inside, it was a minimalist design with slim bucket seats. The dashboard was flat and straight, with a rounded front side, while the carmaker installed three dials in individual clusters in front of the driver and another two in the middle of the dashboard.

At the back, the quarter panels and the engine's hood were lifted to reveal the Volkswagen 1.8-liter turbocharged engine that produced 240 hp. 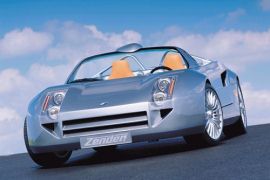