Volkswagen's first-ever foray into mass-producing an electric car that was developed with battery power form the ground up and is not just a revamped Golf, the ID.3 is the first product spawned from a multi-billion investment in EV models and factories. Sized similarly to a regular compact car, such as the carmaker's own Golf, the fully electric car was unveiled officially at the 2019 Frankfurt Auto Show and is based on an EV platform called MEB, which will be shared with other electric cars from the Volkswagen Group.

With only one battery size available in the beginning, the Volkswagen ID.3 offers a range of up to 420 kilometers according to the WLTP cycle. The 58 kWh lithium-ion battery has fast-charging capability at an output of 100 kW, which would give the car enough juice within 30 minutes to cover a range of up to 290 kilometers (WLTP). A smaller 45 kWh battery option will offer a range of up to 330 kilometers (WLTP) and a lower purchasing cost. The top of the range (literally) Volkswagen ID.3 will feature a 77 kWh lithium-ion battery, which is enough for a maximum range of 550 kilometers according to WLTP standards. The only powerplant available is an electric motor that delivers 204 horsepower and 310 Nm of torque, and it powers the car's rear wheels, making it the first RWD Volkswagen in ages. 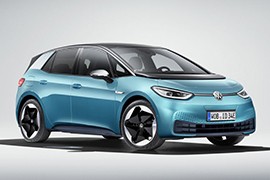 2 Rare 1946 Volkswagen Beetle Found in a Basement, Spent Decades in the Dark

3 Dream Big: The Iconic Phone Car Is a ‘75 VW Beetle Rebodied as an Old-School Desk Phone

5 Volkswagen ID. Buzz Production Comes to a Screeching Halt Due to Battery Issue