VinFast didn't let the big family haulers aside and created the VF 9 as a people carrier with room for up to seven people aboard.

While the world was shocked due to the war between Russia and Ukraine in Europe, the Vietnamese automaker pushed forward its development program and introduced the VF 9 crossover at the 2022 New York Auto Show. It was a bold move from the carmaker, which tried to stay one step ahead of the competition.

With a design signed by the renowned Pininfarina Design Studio, the VF 9 played in the same dimensional league as the well-established crossovers, such as the Chevrolet Traverse or the KIA Telluride. The design, on the other hand, was clearly fresh. The front of the vehicle sported the same signature lighting LED, with a V-shape in the middle, to emphasize the brand's logo. Even though it didn't need too many cooling areas since it was electric, it sported wide air intakes in the apron and above the bumper. From its profile, the car featured a tall beltline ending on unique-looking C-pillars that resembled two V-shapes pointing one to another. The back of the vehicle showed a wide tailgate and a light strip that served as taillights.

The interior shared some components with its smaller sibling, the VF8, such as the 15.6" touch-screen display on the center stack and the HUD for the driver. Thanks to the three rows of seats, the crossover could accommodate up to seven passengers. As an option, the middle row was available with two captain seats that provided more comfort and a premium experience to their occupants.

VinFast developed the electric, seven-seat crossover to host an option of two drivetrains, depending on the market. 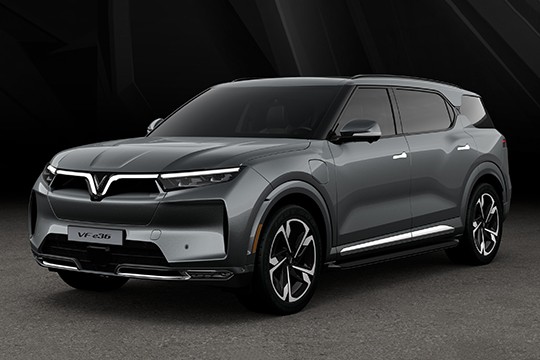