The Vietnamese automaker broke covers of the magazines with the VF8 in spring 2022, and it looked like a mature vehicle, not a tryout made by a startup company.

Vinfast invested many billions in developing a new platform and creating a range of vehicles from the ground up. After the carmaker started to understand what's about the motoring industry, it created a range of electric vehicles ditching the former gasoline-powered vehicle it had already produced since 2019.

The VF8 was a crossover that tried to outpace not only its competitors but also brought many improvements and a premium feeling for its customers. At the front, the vehicle sported the signature LED light strip and the V-shape badge that took center stage of the front fascia. On the lower side of the apron, the automaker installed a wide, trapezoidal grille flanked on the sides by the LED daytime running lights and a pair of scoops that channeled the air around the vehicle. The VF8's profile revealed the sculptured door panels and, at the back, a raked-forward rear windscreen for the broad tailgate. Moreover, the back of the car also featured the same signature V-shaped taillights fitted with LEDs.

Inside, the carmaker carried over the same idea that Tesla had with a center-mounted, 15.6" landscape-oriented touch-screen. The driver, on the other hand, could see all the information in front of them, projected on the windshield as a HUD. Thanks to the flat floor, the VF8 provided plenty of room for all five passengers that could fit inside the ample, generous cabin. As an option, the VF8 also came with a sunroof that could've been voice-controlled. The front and the rear outboard seats from the bench were heated and cooled, adding more comfort for customers.

Under the hood, the VF8 featured a pair of electric motors that drove all four wheels. For selected markets, the vehicle was provided with only one powerplant. 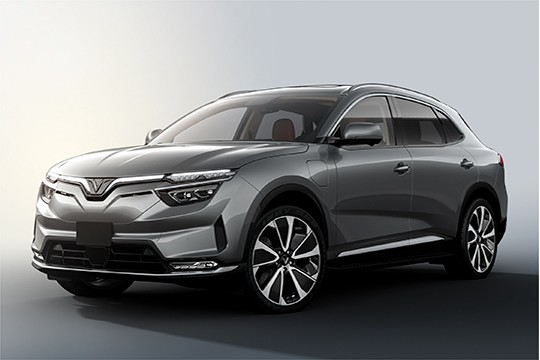