It was available with three doors, as well as with five doors.

The fourth generation of the Toyota Land Cruiser started its journey in 2009. It didn't look too different than the model it replaced it. For some unadvised viewers, that model could just pass as a facelift. But it was a new vehicle. From the front, it was hard to tell the difference between a 3 or a 5 door version of a Prado. Both of them had the same chromed grille with 6 vertical slats. From the side though, it was clear that not only there were fewer doors, but also a shorter wheelbase for the 3 doors when compared to the 5-door version.

Inside the vehicle, there was room for five passengers, with a decent amount of trunk space. Not too much though. For those who wanted more, the rear seats could have been folded away. Luckily, the spare-wheel was not located inside the trunk. There was an option to install it outside the tailgate or underneath the car. The standard audio unit featured a basic LCD display, but a bigger, color screen was offered as an option. It could also show various information regarding fuel consumption and Eco-driving tips.

The short. 2451 mm (96.5") wheelbase made the car behave better in some off-road situations, due to a tighter turning radius and a better break-over angle. 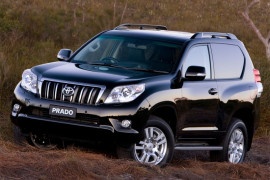