The Japanese carmaker had to recover the ground it lost with the J90 model, which didn't prove to be very successful, and that's why it was replaced sooner than other Land Cruiser models. The new model, code-named 120, offered a 109.8" (2790 mm) wheelbase for the five-door version, which was more suitable for most situations than the short-wheelbase, three-door version.

Toyota designers threw away their old design books and installed swept-back upwards headlights. Its big, wrapped-around front bumper was not metallic anymore but made from plastic. Its flared wheel-arches were a statement for off-road capabilities. As an option, the carmaker offered side-steps, which helped the ingress and egress from the car but decreased the ground clearance from the sides.

Inside, the five-door Land Cruiser offered room for up to seven people, with two jump-seats in the trunk. The designers made a car-inspired dashboard with curved lines and a center stack adorned by two aluminum-colored plastic trims on the sides. On top of it, the Land Cruiser featured a distinct LCD for the on-board computer. Depending on the trim-level, the carmaker installed wood-trims on the door panels and dashboard.

Under the hood, Toyota installed two engine choices: a 4.0-liter gasoline V-6 and a 3.0-liter turbo-diesel inline-four. The latter was available with a four-speed automatic or a five-speed manual, while the former was exclusively paired to an automatic transmission. All models featured an all-wheel-drive system with a transfer case, center-differential lock and low-range gear. 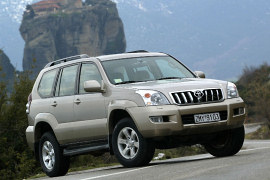