Toyota introduced a new generation of the renowned Land Cruiser in 2002 and replaced the older J90 in both versions, with three and five doors.

With the J90, Toyota lost some ground to its fans since the car was not exactly a hit on the market due to its poor off-road performances compared to other 4x4s. So then, the carmaker burned the midnight oil and managed to create the Land Cruiser/Prado 120, which matched the carmaker's reputation.

In its three-door version, the SUV sported a shorter wheelbase than its five-door sibling but shared some important parts. For instance, they had the same front fascia with swept-up headlights. The plastic wrapped-around front bumper was mandatory to comply with safety regulations regarding pedestrian protection. From its sides, the 3-door Land Cruiser/Prado provided the same-size doors as on the five-door version, which made problematic the ingress and egress to the rear seats. In addition, the rear side window featured a pop-out mechanism so the cabin could get some fresh air.

Inside, the carmaker's design team took its inspiration from sedans and hatchbacks, creating a tall center stack that hosted the controls for the HVAC and the sound system. They placed the gear stick and the transfer-box selector between the front seats. Apart from the difficult access, the 3-door Land Cruiser/Prado 120 provided enough room for two adult occupants in the back. The trunk, on the other hand, was tiny.

Toyota offered the Land Cruiser/Prado with either a 4.0-liter V6 gasoline or a 3.0-liter turbodiesel engine. Both were mated with a five-speed manual as standard, while a four-speed automatic was on the options list. Moreover, all versions featured a two-speed transfer box with a locking center differential. 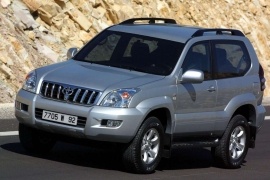