Toyota introduced the Corolla Cross in 2023, filling the gap between the smaller Yaris Cross and the famous Rav4 SUV.

Customers' desire for more crossovers and SUVs was the one that made most automakers create either new or upgraded versions for vehicles that could fall into these segments. Toyota was already experienced in creating such cars and noticed that even its smallest crossover, the Yaris Cross, was well-received by the market. So they tried to apply the same recipe to the Corolla lineup by introducing the Corolla Cross in 2023.

From a standpoint, the vehicle looked like it was a shrunk Rav4. Its wide and narrow headlights flanked the oversized A-shaped grille adorned the front fascia. Its bumper formed another wide A-shape on the lower side and included the fog lights. From its sides, the Corolla Cross revealed the black trims around the wheel arches with matching rocker panels. Finally, at the back, the car received a silver shield under the black bumper and a roof spoiler at the top of the raked-forward tailgate.

Inside, Toyota installed a similar design as the rest of the Corolla range, with a floating 10.5" touchscreen placed atop the center stack and just a few buttons for the climate control unit. Another screen filled the instrument cluster and offered a few personalization options for the driver. The Japanese automaker also added some luxury touches and provided the car with an option for man-made leather upholstery. Beside the front seats, the Corolla Cross featured a bench in the back for three adult-sized passengers.

Under the skin, the Corolla Cross featured the same TNGA platform fitted with a front- or an all-wheel drive system. In addition, all versions received the already famous e-CVT gearbox. 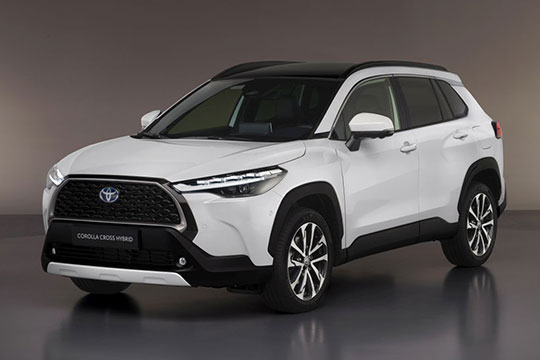