Toyota introduced a crossover vehicle based on the same platform as the Corolla in 2021 and named it Corolla Cross.

Some might remember that the Japanese carmaker built the first Rav4 generation on top of a Corolla platform back in 1994. Over time the ties between the two models became barely visible. But since the original concept of a light crossover built on the same platform as its best-selling nameplate model was good, the carmaker did it again and thus resulted in the Corolla Cross.

Based on the same TNGA-C (Toyota New Global Architecture-Compact) platform as the Corolla, the Cross version featured a different design than its known hatchback sibling. It looked more like the way a Rav4 should be, with a broad trapezoidal grille at the front and a pair of slim, swept-back headlights. In addition, the carmaker placed unpainted, black plastic moldings on the lower side of the bodywork to protect the paint from scratches.

Inside, the Corolla Cross retained most of the features that made the Corolla a best-selling car in the Toyota lineup. Inside the instrument panel, the carmaker placed two large dials with two additional gauges on their lower side for the coolant temperature and fuel level. On the right side of the cluster, a TFT display showed information from the onboard computer. Atop the center stack, Toyota’s designers placed a floating-looking infotainment screen.

Thanks to its SUV-like profile, the Corolla Cross was a new alternative in the crossover market, and Toyota built it with rear- or all-wheel-drive system. Under the hood, the carmaker installed an inline-four, naturally aspirated, gasoline engine paired either with a CVT. 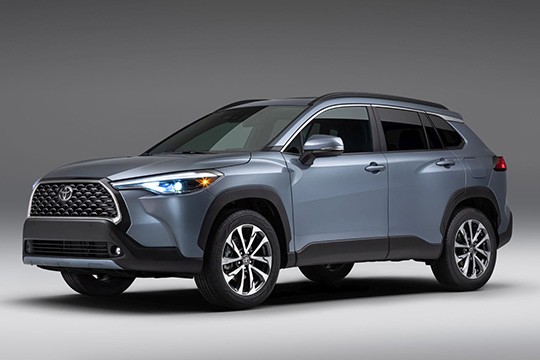