Toyota launched the ninth Corolla generation in 2000 and, four years later, it introduced the facelifted version for the entire range, preparing it for the Euro 4 Emission standards.

The Corolla was always a strong competitor in the compact segment. While in the U.S. had a smaller niche segment, in Europe, it had to fight against the best of the compact vehicles, such as the VW Golf, Renault Megane, Opel/Vauxhall Astra, and Ford Focus. Another important contender on the market also was the Honda Civic 5-door. In 2004, Toyota had to do a facelift to improve the compact Corolla, which didn't look too good in the sales charts.

Since there was little to do with the exterior look, the Corolla 5-door was improved in the technical department. The new smoked headlights and a reshaped bumper aimed for a sportier look. But the rest of the greenhouse, with a more upright windshield than the other contenders, didn't help. A revised grille with one horizontal slat instead of a black mesh grille improved the car's appearance.

Inside, the Corolla was fitted with an option for sportier-look seats but without big bolstering on the side to help during fast cornering. The simple layout of the dashboard was not as bold as those offered by the other competitors. Toyota's design philosophy was not so appealing for European customers.

In the technical department, the Corolla offered a choice of five diesel and gasoline engines. A five-speed automatic gearbox was available on specific models, while the five-speed manual was fitted as standard. 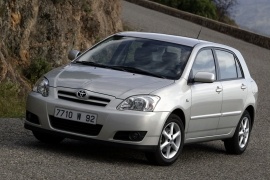