In the mid-80s, Toyota raised the bar and changed the game, noticing people’s desire: a car that would do more than just taking its occupants from A to B.

The new Corolla came to life under the newly promoted development leader Akihiko Saito’s supervision. His vision was pretty simple and complex at the same time, as he stated to his team: “I believe that the Corolla must erase the image of family cars of the past. Wouldn’t it be nice if the quietness and ride comfort of the Crown and the attractive appearance of the Mark II were achieved in a vehicle the size of the Corolla?”

With this idea in mind, the team focused on developing a powerful design regardless of the body style, while the new Corolla also had to be fun to drive.

Aesthetically, the new Corolla was wide and low, with more rounded edges compared to the previous generations. To give the impression of a luxurious vehicle, the A and C pillars were pulled closer together, and, for the five-door version, the carmaker installed an additional set of windows behind the rear doors.

Toyota considered people’s opinions regarding interior design. Thus, they visited their customers to better understand what they were looking for: a note of luxury and increased comfort. The Corolla featured velour and thick-knitted fabric materials. Optionally, customers could choose a maroon interior color scheme that was rather seen in the most luxurious vehicles of the time.

All controls allowed easy operation, while Toyota gave great attention to the switches' feel, besides the overall well laid out instruments. 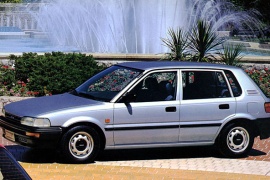