Toyota introduced the 4Runner's second generation in late 1989 with a closed bodywork and four doors, fixing the main issue of the first generation, but lost the open-top option in the process.

The craze for SUVs and crossovers was not started yet at the beginning of the '90s when Toyota introduced the second generation. Those were the times when an SUV had to cope with offroad trails, snow, and deep mud paths without tearing a sweat. The carmaker still made it on the same chassis as the HiLux pickup but added some comfort features that made the 4Runner an excellent daily driver, as long as the driver was not in a hurry.

With its four-door bodywork, the 4Runner became a family car overnight. It still had the same rugged appearance with its flat front fascia and short overhang. The carmaker designed the front bumper with a chromed upper side and a black lower side. For those who were still nostalgic for the first generation, Toyota offered a two-door version as well, with a pop-out window for the rear passengers. The tailgate was opened downward in the back, like in a pickup, with the rear window rolled inside.

Inside, Toyota tried to make a car-like interior with a low seating position, which was not very good while offroading, but great in any other situation. The dashboard was simple, narrow, and curved. It sported a wide instrument cluster extended over the center stack where the carmaker placed the climate control unit above the radio cassette player. For the rear passengers, Toyota installed a split-folding bench.

Under the hood, Toyota installed the same engines as its predecessor: an inline-four and a V-6. The main difference was for the drivetrain, where the carmaker traded the older front solid axle with an independent suspension, which provided a much comfortable ride. 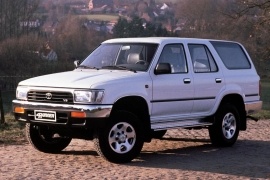