2 2023 Suzuki Fronx Debuts in India, Looks Like a Baleno on Stilts

Suzuki finally introduced a five-door version for its small-sized off-roader Jimny in 2023 but made it available only for specific countries.

Unveiled at the 2023 Auto Expo in Delhi, India, the five-door Jimny was the carmaker's answer to many critics that asked for such a version. Thus, it provided enough room in the back for passengers and, thanks to the extended wheelbase, provided better road behavior than its short-base sibling.

The Jimny five-door carried over the front end of its shorter sibling but with an enhanced look on the front fascia. Thus, a black panel was installed over the four-slat grille and around the headlights and blinkers. But the main difference was on its profile, where the vehicle received a second set of doors for the rear passengers and a narrow vertical third window next to the trunk area. At the back, as its three-door sibling, the five-door Jimny got the same vertical drop for the side-hinged access tailgate.

Inside, the automaker installed the same narrow but high-mounted seats at the front. The dashboard was slim and on the passenger's side, featuring a horizontally mounted grab handle. The instrument panel was fronting the driver with two large dials in individual clusters flanking a center-mounted LCD. Atop the center stack, the automaker placed the infotainment system. At the back, thanks to the longer wheelbase, the five-door Jimny finally offered more legroom for passengers. It was not enough to stretch their legs, but better.

Under the hood, Suzuki installed a mild-hybrid drivetrain fitted with a 1.5-liter gasoline engine that produced a mere 105 ps (104 hp/77 kW) and 134 Nm (99 lb-ft) of torque. It was paired with either a five-speed manual or a four-speed automatic. In addition, a transfer case with high and low-range gear was fitted as standard. 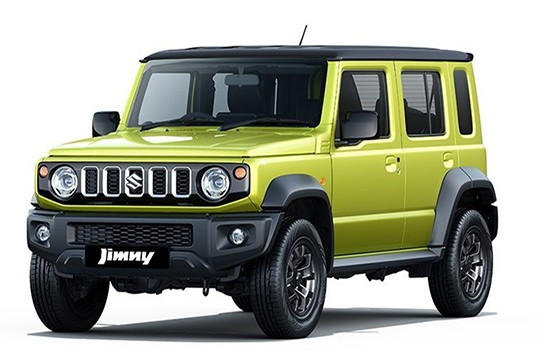