Ten years after Suzuki sold the Santana car-factory to the Andalusian government, the Spanish brand started to build a licensed version of the well-known Suzuki Vitara.

The Santana 300 was the three-door version, while the 350 was the five-door bodywork. Both vehicles were very suitable for the market. Due to a revised design, affordable price, and off-road capabilities, it remained in production, well after the new partnership with Iveco started in 2006. It was a harsh ride for the small Spanish carmaker, which ended its road in 2011.

It was almost impossible to notice a difference between a Suzuki Vitara and a Santana 300/350 from its sides, but the front was a different story. While the GM-based Vitara featured rectangular headlights, the Spanish carmaker decided in favor of four round headlamps. A trapezoidal grille with a cross-hair in the middle made the car looks different.

Inside, the Spanish designers just applied the Santana badge on the Vitara steering wheel, which was all of their work. The rectangular air vents on the dashboard and the center stack layout were the same as in the Vitara. There were a few trim levels, but most of the Santana 350 were offered in the top trim level, the JLX.

Under the hood, Santana was offered with only one engine option, the 1.6-liter turbodiesel unit. It was paired to a 5-speed manual gearbox. A transfer box with low-range gear transformed the car from 4x2 into a 4x4 vehicle with good off-road abilities. 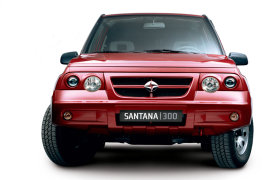