Apart from the sedan version, Chrysler designed the compact Neon in a two-door version as well to attract more young buyers and lure them away from the Civics.

A young customer needed a low-budget vehicle easy to drive, easy to fix, and cheap to insure. The American carmaker made the two-door version and sold it as a Plymouth as well to attract more buyers into its showrooms.

While the design was not the best part of the Neon Coupe, there were a few attractive features for the car. Despite its bodywork configuration, its long front two doors and tall greenhouse allowed easier access to the rear seats than in the Civic Coupe or the Chevrolet Cavalier. Moreover, its frameless doors added a bonus point for the car’s aesthetic.

Inside, thanks to the long wheelbase for its class, the Neon Coupe provided enough room for four adult-sized occupants. Like its four-door sibling, it featured the same cheap and hard plastic material for the door cards and the dashboard. For the base trim level, Plymouth offered cranked windows and no AC, but that was an option. On the upper trim levels, the carmaker installed an audio system and standard tachometer.

Under the hood, the only engine available was a 2.0-liter inline-four. The carmaker paired it with a standard five-speed manual or, as an option, a three-speed automatic. 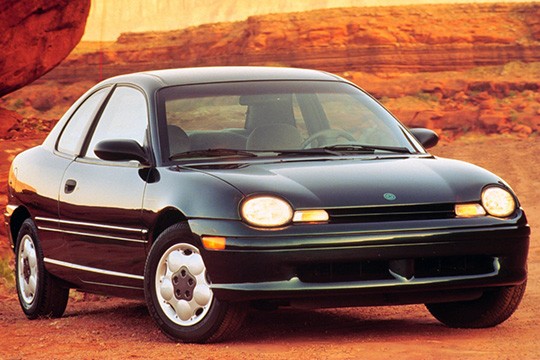