Part of the cloud-car family sold by Chrysler in the late ‘90s, the Breeze was the most affordable of them all. Its siblings were the Dodge Stratus and the Chrysler Cirrus.

Designed in the cab-forward theme, the Breeze tried to look more expensive than it actually was. It managed to start under the $15,000 range and climbed up to $20,000, which was not a bad deal at all for those times for a good-looking family sedan.

Penned under the new bio-design trend, the Breeze offered a narrow front end with slim headlights, which attracted many critics for night-driving due to poor lights. In addition, its grid-like grille with vertical and body-colored slats didn’t look as good as its siblings from Chrysler and Dodge. But thanks to the ascending beltline and the curved lines, it still looked sporty and elegant.

Inside, the Breeze provided a cloth upholstery for the base model and artificial leather for the upper trim level. The dashboard featured an instrument cluster extended over the center stack. Plymouth offered the vehicle with decent features even for the base trim level, such as the AC unit or the front power windows. Surprisingly, it provided more rear passenger room than the much costlier Lexus LS 400 and a fold-down rear bench that expanded the trunk area.

Under the hood, the Breeze received a small but sufficient engine range. The most expensive version featured a 2.4-liter engine that was available exclusively with a four-speed automatic. For the base version, though, the two-liter powerplant was paired to a five-speed manual. 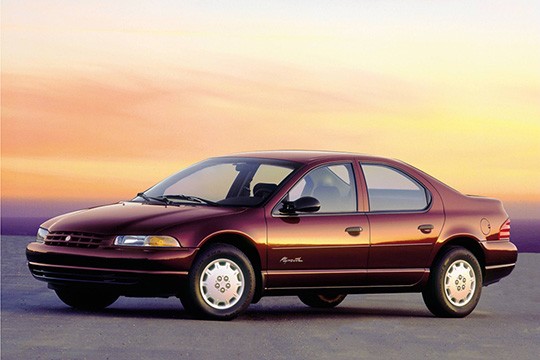