4 Moe Shalizi Giving Up Another Car This Month, an All-Original 1970 Plymouth Superbird

Plymouth introduced the first generation of the Barracuda in April 1964 and built it on top of Chrysler's A-body sharing many parts with the Vaillant.

Created as a competitor for Chevrolet's Corvair, the Barracuda soon found itself pitted against Ford's Mustang, which became a hit on the market. Even though it was more expensive than the original pony car, the 'Cuda was well received by customers, thanks to its unique fastback styling and interesting interior features.

On the outside, the car featured a front fascia with the parking lights moved towards the middle of the one-slat grille, while the main headlights were on the outer side. The car's flat hood sported a crest in the middle that ran towards the windshield. Its profile revealed a unique styling characterized by the largest rear windscreen on the market at that time. It was 14.4 sqft (1.34 sqm) large. The sloped line continued on the short trunk lid that opened independently. It wasn't a liftgate. Finally, the Barracuda featured narrow and tall taillights at the back, with the round reversing lamps placed lower.

Inside, the Barracuda's name was applied on the door panels, which was uncommon. The flat dashboard sported an aluminum upper side and a black lower one. In front of the driver, the automaker installed a simple dashboard with just a large speedometer and three gauges for the fuel level, coolant temperature, and ammeter. Plymouth installed a pair of bucket seats at the front and a folding bench in the back. The car offered two storage areas: one in the trunk, accessible from the outside, and one behind the rear seats. In addition, a folding panel could've been open between these two areas.

The first generation of the Barracuda was available with three engine choices: two inline-six and a small-block V8. 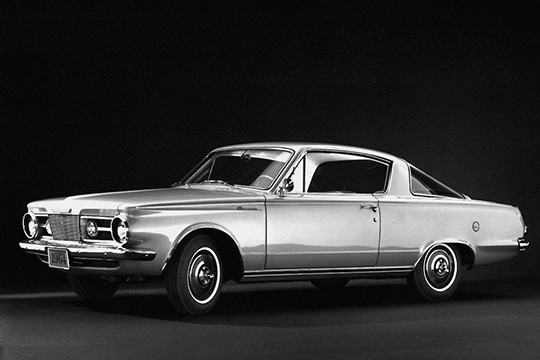