5 Oldsmobile Diesel V8: The Engine That Swore Americans Off Diesels for the Next 40 Years

Contrary to general belief, Toronado's appearance is actually linked to series of fortunate events rather than of extensive research and styling. The original concept originated as 1962 sketch signed by Oldsmobile designer David North. Although North's daring design was never intended for production, GM management caught sight of the drawing and allowed Oldmobile to start building the vehicle within weeks. The first generation vehicle (1966-1970) came equipped with two versions of the powerful V8 Rocket gasoline unit that propelled the car from 0 to 60 in less than 8 seconds despite Toronado's average 5,000 lbs weight. 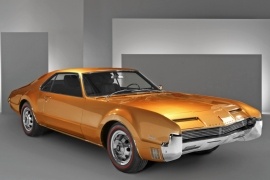