The cooperation between usual competitors on the market was not something new.

In 1992, Nissan and Ford Motor Corporation launched the Mercury Villager at the Chicago Auto Show.

While both General Motors and Chrysler already had a good start for the rising minivan market, Ford was lacking behind. At the same time, Nissan had a very good platform fit for building an MPV on it. By joining their forces, the result was the Mercury Villager. It wasn't the first jointly developed product by the Japanese and American companies. There was a cooperation between Ford Australia and Nissan in the mid '80 that led to the duo Ford Corsair – Nissan Pintara (also known as Nissan Bluebird in Europe).

In order to gather more attention and a wider public target, Ford also released its own version of the minivan, named Aerostar. The Villager was distinguished by its siblings due to a lightbar between the headlights. It was available only in two-tone body color, unlike the Nissan that featured a uni-color body.

The Villager was based on the FWD platform from the Nissan Maxima. It also had a modified version of the 3.0-liter V6 engine from the medium-sized Japanese vehicle that was sold in the U.S. After a joint effort, the duo Mercury Villager – Nissan Quest was launched on the market, with specific features so the vehicles would not compete for one to another. The only gearbox available was a Jatco 4-speed automatic. 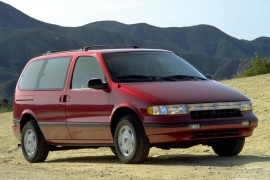