Launched in 2005 on the same platform with the Ford Escape and Mazda Tribute, the Mariner was marketed as a premium product in the compact SUV segment.

The 2008 facelift was well-deserved by the Mariner since it survived well over the world economic crisis. Its relatively affordable price for a premium SUV, combined with a big, roomy, interior attracted more customers. And, along with the facelift, the exterior styling was enhanced.

The 2008 Mariner featured bigger headlights and a smaller, but taller, grille. The boxy shape remained, but the raked grille and rounded corners made it more attractive. The powerdome hood had a reverse crease that enhanced the overall look of the car. In the back, the new taillights had four inner lenses and a clear lamp with a red inner lens.

Inside, the Mariner featured various upholstery options, depending on the trim level. For the Premiere, two-tone leather upholstery with Alcantara in the middle and black exterior gave a posh look for the interior. A bigger center console was installed and featured a huge compartment, where a laptop could have fit easily. A new infotainment unit was placed on the center stack. The instrument cluster was redesigned as well, showing clear information. 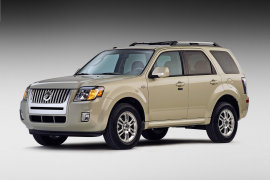