The luxurious brother of the Ford Escape was the Mercury Mariner.

It was built on the same platform as Mazda Tribute.

The compact SUV was positioned as a premium vehicle, despite its underpinnings with the Escape. But unlike its blue-oval brother, the Mariner featured a more stylish appearance and it was fitted with better features.

On the outside, the chromed grille with vertical slats between the headlights created a strange impression of a fence. The straight A-pillars were characteristic to a better off-road vehicle, but the standard Mariner came with a front-wheel-drive only. The boxy look of the car was far from the look of a station-wagon and that was good for a premium SUV.

Inside, the Mariner was praised for its roomy interior with seating for five. Its long wheelbase allowed good legroom for the rear passengers. For the base trim level, named Convenience, the Mariner featured cloth seats, but top levels, Luxury, and Premiere were fitted with leather seats either as standard or as an option. The big trunk was among the biggest in its class.

Under the hood, the Mariner started with a 153 hp four-pot engine mated to a standard 4-speed auto and front-wheel-drive. The 3.0-liter V6 was available with either front- or all-wheel-drive. There was a hybrid version as well, which featured better fuel-efficiency. 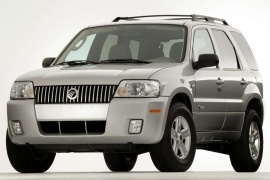