Mercury brought at the 2002 Chicago Auto Show a concept car named Marauder, trying to see if the customers could have been interested in the nameplate's revival after a 33-year hiatus, and they were.

Thus in the following year, the American brand introduced the 2003 Marauder.

While the concept car was a five-passenger convertible, the production model was a four-door sedan. Maybe that was a mistake, but the car proved to be worthy. It was based on Ford's Panther platform, which the blue-oval brand also used for the Crown Victoria and the Lincoln Town Car.

Just by looking at the Marauder, it was easy to distinguish the famous Police car, but there were some differences. At the front, a black mesh-grille filled the front fascia between the headlight, while the bumper sported two foglights on the outer sides of the apron. It looked more or less like a factory-tuned car with its five-spoke light-alloy wheels. The classic, cab-rearward design with an almost vertical, thick C-pillar resembled the one from the Crown Victoria, while at the back, the corner-mounted taillights showed three horizontal slats, resembling the Mustang.

Inside, the carmaker placed a tilted-forward dash panel with an integrated CD-stereo unit placed above the center stack between the central vents. Unlike the Crown Victoria, the Marauder sported an additional set of gauges with white dials and red needles for the oil pressure and voltage. In the instrument cluster, the carmaker placed white dials and red needles as well. Needless to say, the rear seats were comfortable enough for three passengers, despite the tall transmission tunnel.

Under the hood, a healthy 4.6-liter V8 DOHC provided 302 hp. Power went to the rear wheels via a 4R70W four-speed automatic transmission and a limited-slip differential. 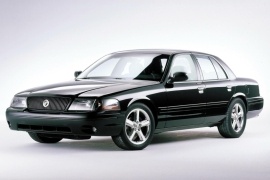