Ford introduced the fourth generation of the Mercury Grand Marquis in 2003 and, four years later, it had to update the model.

With a world financial crisis that cut jobs and wiped-out brands like they have never existed, the carmakers' biggest problem was not how to increase their revenue but how to survive. Ford desperately tried to survive and sold Volvo, Aston Martin, Jaguar, Land Rover and Mazda. The blue-oval brand, with over a century of experience, survived after two world wars and a few other major crises. But the 2007 one was the harshest. In a desperate attempt to keep the Mercury brand alive, Ford stopped its Crown Victoria and diverted its customers toward the Grand Marquis, which received a facelifted version.

But Mercury didn't die without a fight and put the Grand Marquis on the map with Crown Victoria features, good for families. The car brand didn't care about its luxury-oriented customers and cared more about those who couldn't afford a Mercury before but still tried to get one. For them, the Grand Marquis was a great deal. It was offered in only one trim option but well finished and with many features inside. On the outside, there were minor modifications that included the additional fog lights under the front bumper.

Inside, the main change was for the instrument panel, which featured a trip computer and the addition of a tachometer. The Grand Marquis was one of the last vehicles built by Ford without one.

But despite all the modifications, the last Grand Marquis rolled-out from the assembly lines on January 4, 2011. It was also the last Mercury built. 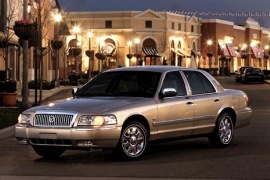