Mercedes-Benz introduced an updated version of its small compact four-door coupe CLA in January 2023, and the car featured more upgrades than just a few colors and wheel options.

After four years on the market, the CLA clearly deserved an upgrade. So the German automaker finally brought it as a 2024 model year. With this version, Mercedes upgraded the entire range's exterior, interior, and drivetrain.

The German carmaker introduced the second generation of the CLA on the market in 2018 as a four-door coupe for the A-Class hatchback. The vehicle made its way into customers' hearts with its sporty shape. However, it was still capable of transporting four adults inside, but by 2022 standards, it was already old. Thus, the facelifted version came with a new 3D grille that sported a horizontal bar. Furthermore, to emphasize the vehicle's sporty character, the lower bumper featured an AMG-inspired A-shaped center grille flanked by two scoops that channeled the air on the side of the car. In addition, the headlights received an LED upgrade and a different pattern.

Inside, the CLA came fitted as standard with a pair of 10.25" displays, one for the instrument panel and the second, touchscreen, for the infotainment system. In addition, high-seatback seats were installed for the front occupants. Unfortunately, like on the non-facelifted version, the rear bench was profiled for two, and the headroom could have been better.

Under the hood, Mercedes-Benz offered a choice of turbocharged gasoline engines helped by a new 48 volts starter generator. While that didn't provide too much power (13 hp), it helped smooth the departures. Power went to the front or all wheels, depending on the version. 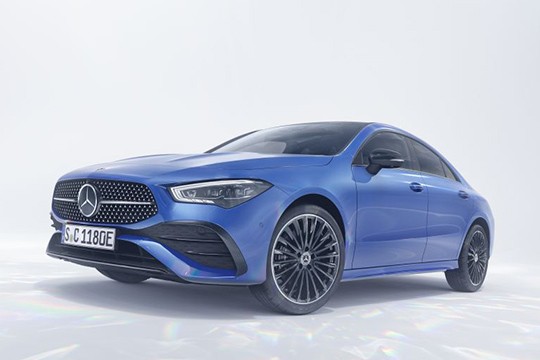