When the first generation of the Range Rover Evoque was introduced in 2011, it featured the most advanced design of the moment.

The 2015 facelift came to keep that advantage.

Land Rover Range Rover Evoque (that is its full name) was offered in three body versions: 3-doors, 5-doors, and convertible. It was not just another compact SUV on the market, it gained a glamorous status.

From the outside, the 3-door Evoque featured a new grille design and new headlights with full-LED. The bumpers were redesigned as well. The 2015 Evoque was offered with three new light-alloy wheels design. For the grille, the standard version featured two horizontal bars, while for the Dynamic trim level a hexagonal mesh-grille was installed.

The 5-door version offered good space for the front occupants. The wide-open doors in the rear revealed a bench for three, but mostly for two. The low-greenhouse design with a sloped roof didn't leave too much headroom for adult passengers. There was a new 8” infotainment unit installed, with a dual-view screen, and HDD-based navigation.

The Evoque was based on the same platform with the Land Rover Freelander 2. It was available with front or all-wheel-drive system. The 3-door eD4 version with front-wheel-drive featured the lowest emissions level ever achieved by a Land Rover, with only 109g/km. The entire engine family, named Ingenium, was more fuel-efficient than before. Depending on the version and engine, it was mated as standard with a 6-speed manual or with a 9-speed automatic transmission. 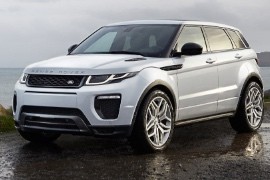