It was the second attempt made by Land Rover to build an SUV, and the result was a capable off-road vehicle that could put a shame on other 4x4 vehicles.

Land Rover Freelander was the last vehicle developed with Ford before the blue-oval carmaker sold its stakes to the Indian company Tata.

The platform was used for the Ford Mondeo and Volvo XC60 as well, but the result was better for the British brand. While its predecessor was built together with BMW, the Freelander's second generation was completely different, from tip to toe. It kept the overall look of a Land Rover, with a subtle bump over the rear side of the roof. Its big, rectangular headlights and the similarly shaped grille made the car looks tougher. The rest of the vehicle featured rounded edges and flat door-panels, narrower than the outer track. A set of plastic molding protected the lower side of the SUV.

Inside, the Freelander 2 offered enough room for up to five adults due to its clever platform. The designers installed a curved dashboard with a high center console. They put three large dials on the instrument cluster with four gauges and an LCD at the bottom. The rear bench featured a split-folding seatback to expand the already big trunk.

Land Rover opted for just two engine versions for the drivetrain: a 3.2-liter V6 and a 2.2-liter turbodiesel developed together with Peugeot-Citroen. It was paired as standard to a 6-speed manual, and there was an option for a 6-speed automatic. The vehicle's most important system was the “Terrain Response,” which could set the torque distribution between the wheels to offer the best possible traction available, depending on the surface. 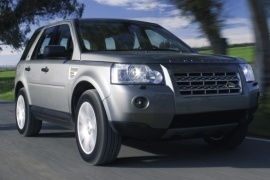