Land Rover started to give a name to its cars, so the former Series III became the Defender in 1990.

The Defender is one of the most iconic vehicles on Earth, and its first step into this world happened in 1948 when it was named Land Rover Series I. Come 1990, the British carmaker was already producing the Series III in three sizes named 90, 110, and 130, according to the vehicle's wheelbase. Thus, when it changed the nameplate, it resulted in the Defender 90, 110, and 130, respectively.

With its squared-body look and short wheelbase, the Defender 90 was clearly made more as a hard-working vehicle than a luxurious one. With its round headlights, flat front fascia, and a tiny overhang, the Defender 90 looked ready to conquer remote places on Earth. From its sides, the box-on-a-box shape featured flat panels and a slightly tilted windshield. Behind the doors, on the sides, the rear windows featured a slide-open system to ventilate the cabin. At the back, a flat vertical drop was typical for the Defender, and the side-hinged door was the only option. Unusually for an SUV, the door was flanked by two smaller windows mounted up on the rear body panel.

Inside, the flat dashboard featured a separate panel for the instruments mounted in front of the steering wheel. The front high-mounted seats offered no side support or bolstering areas, and the tall transmission tunnel separated them. In the back, Land Rover offered either side-mounted, inward-facing benches for four people or a regular bench fit for three.

Under the hood, Land Rover offered a choice of three engines: a Rover-sourced 3.5-liter V8 or a 2.5-liter turbo-diesel that provided either 112 HP or 121 HP (112 PS or 122 PS). It was mated as standard to a five-speed manual and a two-speed transfer case. 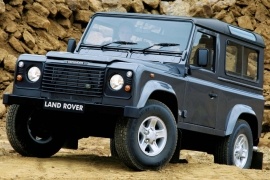