In the Soviet Union, the car-industry was mainly focused around the Tolyatti factory, where it built the Lada/Zhiguli brand in various shapes.

It was hard to hide the Fiat 124 origins under the re-shaped and revamped Lada bodywork. But the Kremlin comrades didn't care too much about that. What they cared about was the car to bring valuable foreign currencies to the desperate Russian economic situation. The engineering team noticed the differences made by the European design trends and enhanced the already old vehicle.

On the outside, the car's shape was still similar to the Fiat 124 station-wagon but featured squared headlights instead of the round ones used before. Since they couldn't found a way to fit plastic, wrapped-around bumpers, they kept the metallic one used before but added some rubber strips on it. In the rear, the slightly raked forward tailgate was redesigned to make room for more prominent taillights.

Inside, the design team installed a new dashboard with an upgraded instrument cluster. There, it placed a larger speedometer and small gauges while the tachometer was dumped. Even though most carmakers already offered power windows, Lada still featured cranked ones without any other option. As expected, the air-conditioning was still unavailable. In the back, the single-folding system for the bench was the only option to expand the trunk.

Under the hood, Lada couldn't develop a better engine than those installed previously and offered two options fed by carburetors. Their fuel-efficiency was bad, and the performances were nowhere near Western compact station wagons. Lada Nova's main advantage was the low price. 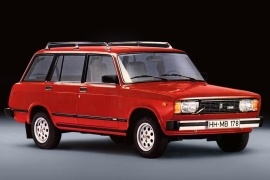