At the beginning of the '70s, the Soviet Union premier Alexei Kosygin assigned AvtoVaz and AZLK to create an off-road vehicle, and competition between the two Russian carmakers began.

The Communist party understood the need for an off-road vehicle, ideal for rough remote areas where roads existed only on lines on some maps. The older GAZ off-road vehicle, built since WWII, was outdated, very uncomfortable, and unreliable. AvtoVaz, who were already producing Lada cars under Fiat's license, won the competition and started building the Niva in 1976.

It was a simple-looking, two-door vehicle. Unlike most other 4x4 cars on the market, it featured a unit-body construction and coil springs in all corners. At the front, it sported two round headlights and a black plastic grille. Unusually for those times, it featured the parking lights and the turn signals above the headlamps. The wrapped-around bumper was metallic on the center section and with plastic ends. At the back, the carmaker installed a liftgate with a very high loading area.

Inside, it was just as rugged and simple as it looked on the outside. There were two seats at the front and a bench in the back advertised for three, but with minimal legroom and headroom. Its dashboard was black and simple. It looked like AvtoVaz carried it over from a soviet military vehicle with rugged buttons. The carmaker installed the gear-stick and two transmission levers on the floor between the two occupants to engage the low-range and lock the center differential.

AvtoVaz installed a 1.6-liter gasoline engine under the hood and paired it with a four-speed manual gearbox. After the fall of the Soviet Union, the carmaker upgraded the drivetrain. It installed a 1.7-liter fuel injected engine, and later on, an option for a diesel carried over from Peugeot-Citroen. 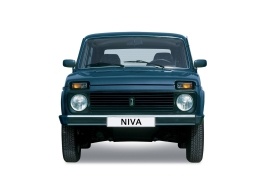