The Russian carmaker AvtoVaz decided to introduce a new model in its lineup, the Kalina hatchback, which it unveiled in 2006 as a hatchback and a sedan.

The Togliatti factory lost most of the orders for its outdated models. But the Russian engineers didn't give up and tried to build a new, small-segment vehicle. This time, they could access the western technologies, and the result was a substantial evolution, from the research point of view, but the final product looked better on paper than in showrooms.

The exterior looked like there were a few design teams, and they didn't talk one to another. The result was a rounded shape with headlights that looked from a different vehicle while the trunk was added after the rest of the car was ready. The small window behind the rear doors resembled the one fitted on the Opel Vectra B, and the taillights looked close to those from the Opel/Vauxhall Astra sedan.

Inside, the designers installed the headlights controls on the steering wheel's left, inspired by some German cars. Unlike those, the Kalina dashboard featured seven air vents, apart from the windshield defroster. The Russian engineers definitely knew how to deal with winter times.

Under the hood, Lada installed one engine option, carried over from the Lada 110 lineup. It was a four-pot 1.6-liter engine that offered 80 hp. It was paired to a standard 5-speed gearbox. The Russian engineers went for the "keep-it-simple, Ivan" method and didn't bother for an automatic transmission. 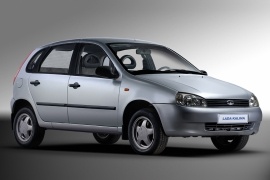 2 Russian Carmaker Lada Stops Production at All Its Plants

3 Can You Change Engine Oil Without Turning Off a Motor? We Now Have an Answer to This

4 Can an Inline-Six Engine Be Built From Two I4s? The Russians Have an Answer