According to Chrysler, it's the most powerful Jeep ever built.

The new Cherokee SRT-8, started production on July-16-2011, being equipped with a 465 hp (344 kW; 461 PS) 6.4 liter Hemi V8 engine. To keep the gas mileage respectable, Jeep has employed a new active exhaust system that lets Chrysler's cylinder-deactivating Fuel Saver Technology operate over a wider RPM band. Chrysler claims that with the larger gas tank, the SUV can now travel up to 500 miles (800 km) on a single tank, while other sources estimate range to be 450 miles (720 km). 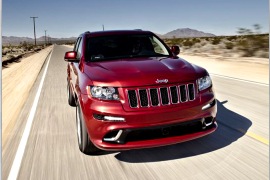