The Palisade was introduced at the 2018 Los Angeles Auto Show and it was the most luxurious SUV in the Hyundai stable.

It shared its platform with the Kia Telluride.

Hyundai increased its market share over the years and it started to upscale its models. There is a long way from the ugly little Tucson to the luxurious, three-row, Palisade. It was built to compete with vehicles such as Honda Pilot, Nissan Pathfinder, and Ford Explorer. Its predecessor was the Hyundai SantaFe XL.

From the outside, it looked very strange with its vertical headlights and extended daytime running lights. It was something saw on the Cadillac Escalade, but the Palisade made it with rounded lines, instead of sharper ones. The long vehicle featured chromed lines around the door's windows, and the roof looked disconnected from the rest of the car, from the C-pillar.

Inside, the Palisade was available with up to eight seats, if a bench was fitted in the middle row. If captain seats were chosen then it offered only seven. On the center console, the gearshift lever was replaced by buttons, leaving more room for elbows and a big storage compartment underneath. The optional 10.25” touch-screen infotainment system was equipped with a Harman Kardon stereo.

The Palisade was equipped with an all-wheel-drive system controlled via a rotary knob on the center console, similar to the one found in a Land Rover. It offered several programs for traction, but it didn't feature a low-range gear. Despite its size, the most luxurious Hyundai SUV was available as a front-wheel-drive only version. Power came from a standard 3.5-liter V6 engine mated to an 8-speed automatic gearbox. Depending on the market, also it was offered with a 2.2-liter diesel engine. 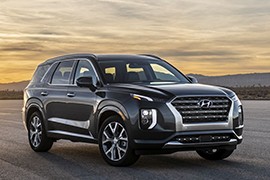 1 Could This Be the Next Hyundai NEXO?

2 Save Your Oil-Change Receipts, or Your Warranty Is Void, Warns Hyundai Owner