Named after the western district of the Hawaii island, the Kona was a bold step made by Hyundai into the electric car segment with a vehicle that could travel more than the city limits without provoking range anxiety.

Hyundai was true to its words and introduced the Kona lineup in 2017 in three main versions: with internal combustion engines, hybrid-powered, and electric-powered. For that, the Korean carmaker developed an entirely new platform, which was used for the Kia Seltos as well. In late 2020, during the world pandemic, Hyundai confirmed its commitment again and showed the Kona's facelifted version.

From the outside, Hyundai's design team introduced a few modifications to the car's look. The new LED daytime running lights showed an arrow-like design pointed forward. Unfortunately, they kept the charging-port door too visible and looked like it was added at the last moment. But Hyundai tried to convince everyone that it was left like that on purpose, as a clear statement for an electric car. The LED headlights were still lower than the DRLs, and their angular look was aggressive. The compact crossover's overall SUV stance tried to convince the customers to keep coming into Hyundai's showrooms, and it was a successful strategy.

Inside, the carmaker installed a completely digital instrument panel. But the biggest changes were the USB charging ports for the rear passengers. An optional electronic parking brake was available on premium trims as a convenience feature. New ambient lighting illuminated the cup holder and footwells, while an aluminum-like finish added a touch of refinement.

For the 2021 model, Hyundai dropped the lower-powered version and kept the 201 hp electric motor. It was fed by a 64 kWh battery-pack that provided enough energy for up to 132 miles (212 km). 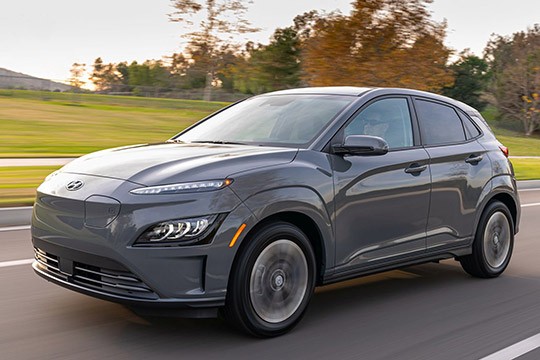