After the fall of Polland's communist regime, the FSO carmaker had to work hard to keep its engine running, and the Polonez Caro model proved to be a successful model for a while.

FSO built the Caro on the same platform used by its predecessor, the Polonez. But under the mid-size sedan hatchback was a 1961 Fiat platform. Giorgetto Giugiaro signed its design, and it was decent for 1978 when the first vehicle rolled off from the assembly line. But in 1991, it was hardly considered a good-looking car anymore. The Polish designers tried to adjust the vehicle's form and introduced the Caro in 1991.

The Caro featured the same hatchback-style but with reshaped headlights and a plastic grille. Its flush door-handles were considered a good innovation for those times, but they were left unpainted. FSO started to offer the Caro with an option for light-alloy-wheels, and that was another important improvement for the Polish car.

Inside, it featured retractable seatbelts and a new dashboard design. Its instrument cluster was wide and filled with dials and gauges. The speedometer and tachometer were bigger and placed in the middle, while the fuel-level, coolant temperature, battery charger, and oil pressure were mounted on the sides. Its gear-stick popped through the center stack, angled toward the driver.

Under the hood, the Polish carmakers installed one of its older 1.6-liter engines fitted with a fuel injection system developed by Daewoo. But its suspension, with a rigid axle and leaf springs on the back, was not fit for a '90s vehicle. 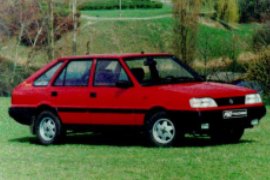