The 2018 Ferrari Monza SP1 was designed for the driver who doesn't want to take any passenger along the road.

The one-seater vehicle was built mostly for collectors.

The car was inspired by the 1955 Ferrari 750 with one seat and track-days in mind. But the SP1 was legal to drive on the public roads. It was accompanied by the SP2 model, a vehicle that offered a passenger seat, so the driver could enjoy a companion.

The low profile of the vehicle showed no room for a windscreen, while the big hump behind the driver hid the roll-over protection bar. With a seat designed and tailored to the exact driver dimensions, the Monza SP1 was built for those who would enjoy a track-day as much as the road to there. A radical choice was made for the design of the cars' compact doors which open upwards. Equally important is the all-carbon-fiber one-piece hood-wing assembly which was hinged at the front to showcase the V12 engine once opened.

The "Virtual Wind Shield" deviated a part of the airflow to maintain driving comfort. But still, the driver had to wear a helmet. The dashboard consisted of one, big, a tachometer, and two screens on its sides. The whole commands and controls for headlights, turn signals, and on-board computer were placed on the steering wheel. 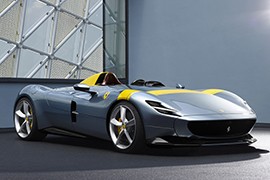