Ferrari lost four cylinders from the GTC4Lusso, but it didn't lose its appeal when it built the GTC4Lusso T but gained in sport-response and agility.

The design was the same as its V12 sibling, the GTC4Lusso, with a shooting-brake appearance and the same long hood as a front-engine Ferrari. It had an option for 20" light-alloy wheels.

The GTC4Lusso T had an HD 10.25-inch touchscreen, a 1.5 GHz CPU, and the sort of responsive, interactive usability a lot of cars could only dream about. It's also nice how Ferrari has designed the dashboard to wrap around it so it's fully integrated rather than stand-out of the dashboard-proud. And, most important, the passenger next to the driver has its own display dedicated to the audio system. Think like the driver has a personal DJ on the road.

With the 3.9-liter V8 engine installed and an increased weight bias toward the rear (46:54%), and the re-calibrated 4-wheel-steering system, the vehicle was more responsive both in entering and entering the corners.

Finally, the tech upgrade is huge and it starts with a 7-speed dual-clutch gearbox, dual-coil adaptive dampers, and the 9th generation ESP. Unlike its sibling, the Ferrari GTC4Lusso, it was only RWD. In order to make the car faster, the electronic-controlled rear differential was re-tuned for a faster response. Last, but not least, the four-wheel steering gives more handling in the parking lot and on the track. 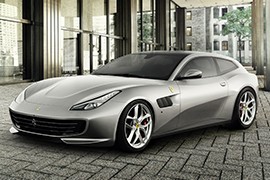