In 1975 Ferrari presented the world its new 308 GTB at the Paris Motor Show, a transverse mid-engined, rear-wheel drive two-seater to replace the Dino 246 GT and GTS.

The 308 GTB was designed by Pininfarina and its production lasted until 1985 when a newer model was built.

Measuring 4,230 mm in length, 1,720 mm in width and 1,120 in height, the Ferrari 308 GTB had a tubular frame and a separate body made out of glass-reinforced plastic (or GRP), which kept the weight to a minimum of 1,050 kg. The GTB was the first Ferrari road car with a fiberglass body, with the exception of the aluminum luggage compartment lid and the steel rocker panels.

The car was powered by a 2.9-liter V8 engine fed by 4 twin-choke Weber carburetors. The European version was producing 255 HP while the US one only cranked 240 HP due to emission regulations and the de-tuning needed to meet them. The car’s top speed was at 252 km/h.

The car was equipped with five-spoke 14-inch alloys as standard and it was later offered with 16-inch alloys on the 328. The GTS version that came in 1977 is basically a GTB with a targa top. 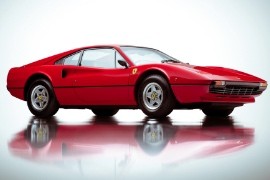