Dodge introduced the third generation of the Viper SRT10 Roadster in 2002 and reignited the horsepower war among the American sportscars.

The Viper has stirred the market ever since its introduction back in 1991. It was unveiled as a roadster, and the coupe version came later. In its twelve years on the market, it became known on racetracks around the world, competing against the Ferrari, Lamborghini, or Aston Martin. Its brute force and unforgiving platform made it a scary yet desired vehicle.

Osamu Shikado designed the roadster in 1999, but the final product suffered a few adjustments. Viper's snake-eye-shaped headlights were already unique and recognized among car enthusiasts. The designer installed an air intake at the front of the hood's power dome, and additional ten slats released the hot air from the engine compartment. On the sides, covered by the side sills, Doge installed the side exhausts, which returned to their original position. It was a true roadster, with only the windshield in front of the cabin and no other pillars. The canvas top was completely hidden behind the seats.

Inside, the spartan cabin left room only for two people separated by a wide center console. The gear-stick was thick and strong like the whole car depended on it. Since it was the best-known American supercar, the designer decided to create a memorable experience for the driver and tilted the center stack toward the driver's seat. Unlike its predecessor, the 2003 Viper featured a cup-holder next to the parking brake, near the power-windows buttons.

The 2003 Viper came with a better braking system and featured ABS. Under the hood, the carmaker installed an 8.3-liter V-10 engine paired to a standard six-speed manual gearbox. It sent all the power to the rear wheels via a limited-slip differential. 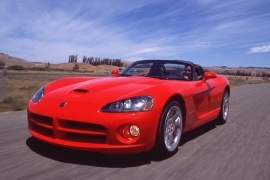