The Challenger name returned on the pony-car battle in the U.S. in 2008 and it was constantly updated. The 2015 model came with a facelift and with a more powerful version: the SRT.

The Dodge Challenger was launched in a bad time when the world economy was on crisis and that didn't help the Chrysler finances at all. In 2011 most of Chrysler's shares were bought by Fiat and, in 2014, the FCA (Fiat Chrysler Alliance) was formed. Even if the Italians had some of the finest engine magicians in the world, they couldn't say no to what the American market wanted: a big, push-rod V8 engine under the hood of a car named Challenger.

The look of the car was mean even in its basic form with a small V6 under the hood. But the V8 SRT versions were even meaner. The Challenger was offered as the SRT 392 and the SRT Hellcat. The dual snorkels on the hood of 392 version resembled the 1971 Dodge Challenger and the wide and narrow grille featured the Challenger name on it, instead of Dodge. The Hellcat featured only one, bigger central air-intake. For the Hellcat, the inner driving light on the front left was replaced by an additional air intake to feed the 707 hp engine.

Inside, the dashboard for both versions resembled the design of the 1971 Challenger, with big and round analog dials, but with a TFT display fitted between them and an infotainment unit on the center stack.

One of the most important improvements for the car was the introduction of the 8-speed automatic transmission, which replaced the older 5-speed automatic. With some help from the European partners, the handling was improved so the car was no longer a drag-strip only car. 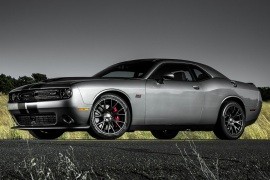