It was the last hope for the struggled Chrysler company.

The smallest of the big-tree was facing bankruptcy, and in the 25th hour, the Dodge Aries/Plymouth Reliant saved the company.

After years of small investments into the R&D department, Chrysler had to pay the bill and found itself on a shifted market that didn't want its large cars during the 1975 oil crisis. Then, the market shifted again in the late '70s and asked for larger vehicles while Chrysler didn't have them anymore. A late developed K-platform with a front-wheel-drive system saved the company.

Dodge Aries, and its sibling Plymouth Reliant, looked boxy like the designers made the mock-up from plywood. But that didn't really matter since the proportions were right, and the car didn't look like it was hanging over its front wheels. A slightly sloped beltline inspired a dynamic look, especially for the coupe version.


Inside, the Dodge Aries featured comfortable seats and a cheap base model but decently equipped with air-conditioning, power windows, and a stereo. It was enough for a commuter vehicle. Its customers appreciated the simple dashboard with an easy-to-read instrument cluster. There was enough room for five, even in the two-door configuration. The upholstery was far better on the upper trim levels, and Dodge offered the car with an 8-track.

For the drivetrain, the Aries was fitted with a choice of three, four-cylinder engines. The top version was fuel-injected, and that the fuel-efficiency into a decent area. 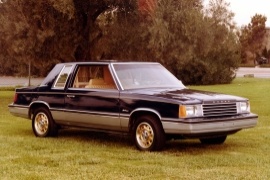