Nissan relaunched its Datsun brand under its Low-Cost Green Car program in 2013, and the first two products were the GO and GO+ models.

Launching a low-cost vehicle without showing a low-quality product was never easy, but in some cases, it was possible. Nissan learned from its alliance partner Renault how to do that, and it tried on its own with the Datsun. Carlos Ghosn, the then president of the Renault-Nissan Alliance, helped to relaunch the brand by presenting the Datsun GO and GO+ in New Delhi, India, in 2013.

The GO+ was the extended version of the GO, both being based on the Micra K13. It sported big angular headlights and a diamond-shaped grille at the front surrounded by a chromed surrounding. Its A-shaped lower bumper and the side-scoops mimicked a sporty look, even though the car was far from that. Its side, sculptured body, and door panels gave a modern look to the vehicle. In the rear, the GO+ featured a longer overhang than its GO sibling.

Inside, the GO+ featured three rows of seats, with the second-row fold and tumble forward to allow access to the third row. But as expected for a small-sized vehicle, it offered room just for small kids in the last row. The car provided 340 liters (12 cu-ft) of space with the third row folded, which was on par with most compact-sized hatchbacks. At the front, the small MPV featured a bench-like two seats with integrated headrests.

Nissan installed only one engine option for the GO+, a 1.2-liter gasoline engine, and paired it with a five-speed manual gearbox. 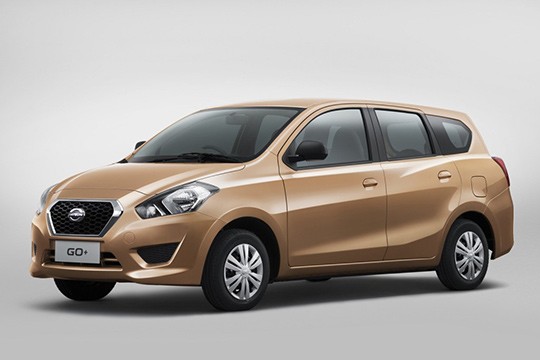