Originally a 90's project by ItalDesign destined to become FIAT's new Cinquecento, the Matiz was stylistically based on the ItalDesign Luciolla.

FIAT rejected the concept so Giugiaro went to Daewoo with it. The production version closely resembled the 1993 prototype, apart from adding rear doors and slight cosmetic touches. At first, there was only one engine available: a 0.8 liter three cylinder which was a carryover from the Daewoo Tico, although a 1.0 liter four cylinder option was added for some markets in 2001, along with some minor design changes. The facelift was first introduced in Korea. 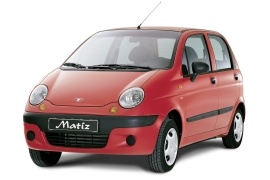