Chevrolet didn't rush on creating new electric vehicles, even though it was a pioneer in this domain with the EV1 in 1996.

But this time, it didn't run and developed an entirely new platform named Ultium.

General Motors likes to take things slowly and develop its products with patience. The EV-1 was not its only tryout in the electric-car segment. Its electrified Volt (Opel/Vauxhall Ampera in Europe) and the all-electric Bolt were just part of its development towards total electric transformation.

At the beginning of 2022, the bow-tie brand unveiled the Equinox EV based on the same Ultium platform used by the Silverado EV pickup. Like its sibling, it was announced with an e-4WD traction system, with a dual-motor setup, one for each axle.

The overall exterior design was still linked to the traditional look of an SUV, with a front area that reminded of the engine compartment. This time, though, its front fascia was not dominated by a massive grille with some specific cutouts for the cooling system. Since it was an all-electric vehicle, it didn't need that much. Instead, only a minor part served that purpose on the lower part of the bumper, while a pair of air-scoops channeled the air towards the car's sides to lower the drag resistance.

Thanks to its short overhangs and long wheelbase, the Equinox provided a spacious interior. The cabin featured the same five-seat layout as usual in such a crossover, with a tall center console, which served as a storage area and armrest for the front occupants. At the back, the split-folding bench offered enough room for three passengers. Since there was no transmission tunnel, the floor was completely flat. 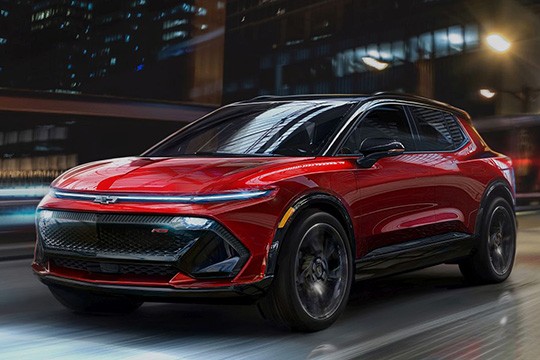